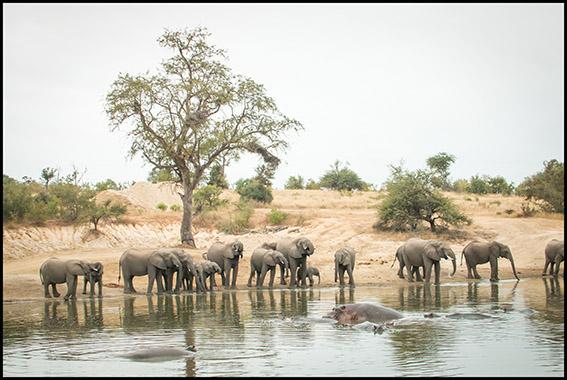 The 21st June marked the shortest day and longest night of the year. It is when the sun is the furthest north it ever gets and is directly above the Tropic of Cancer in the northern hemisphere. Autumn has ended, and we have entered winter. Due to the ‘lag of the seasons’ it is not yet the coldest time of the year, but the bush is drying quickly. Most of the leaves from the deciduous trees have fallen and the grass has lost all its green and turned to brown.

As is normal for this time of year, water becomes a constant source of action, as it becomes scarcer in the environment. The mega-herbivores are making regular visits to the remaining waterholes as they quench their thirsts, although elephants can survive up to four days without water! Rhino are more creatures of habit and visit daily, usually at dusk, for their moisture intake.

Scotia’s young male cub, who is now 16 months old and is getting very close to independence, recently had some fun stalking birds on the water’s edge of one of the dams. Yellow-billed storks and a Hamerkop were feeding in the shallow water when he decided to try his hand at stalking them, in the hope of success! Unfortunately for him, they were wide awake to his presence and he never got a chance to catch any of them, although they did allow him to get pretty close on occasion!

He is growing rapidly in size and confidence and is likely to become a very large and dominant male when he does find his own territory. But that is still another year or so away, and in the meantime we expect to have some great sightings of him.

Scotia was also seen a number of times this month, and will always be a favourite. She recently had an impala kill hoisted in a large open marula tree, which provided some great viewing for a few days. It seems that she knows just how and where to be for classic leopard photos!

The Mhangene pride has also been enjoying some time around the prominent waterholes. Predators are often found resting in the shade of trees or bushes close to water, in the hope that some prey comes to drink during the day, but it also means that they do not have to walk too far in search of water.

Occasionally, however, it is not the prey they were expecting that comes down to the waterhole. When a large rhino bull comes to drink, even these large cats need to make way and be wary of the larger and more powerful grazers.

The young sub-adult had not yet learnt this lesson and thought that it would be interesting to see if playing with a rhino was a good idea. It discovered very quickly, however, that it was not so clever, and scampered back to the rest of the pride!

The Ottawa male is still with the Mhangene pride most of the time and is looking fantastic. It seems that he is quietly biding his time, waiting for the territory to become available once the Matimba males pass on. At this stage there are no rumours of new males coming in from the east, so there is still no pressure on him and no rush. He can wait…

And still they hold on. The Matimba brothers have defied all odds and expectations and are still going! They continue to follow the Ottawa pride for most of the time and, although they are showing their battle scars from the years of dominance, they remain in relatively good condition!

The Ottawa pride remains our most viewed pride and are also doing very well. The three youngest cubs have had their bout of mange, which is a naturally-occurring skin disease due to malnutrition and low immunity, but are all recovering well! They continue their love of climbing trees and are incredibly playful. The sub-adult male is now 18 months old, starting to show the beginnings of a mane, and looking very good!

The constant supply of good water at the camp is also attracting a great variety of animals day and night. Dewane spent a lot of time close to the camp, no doubt attracted to the animals and water in the general area. He continues to move about without a territory, remaining below the radar of the other dominant males, but is maintaining his condition and seems to be doing well.

There is a constant presence of elephant bulls who make regular visits to the waterholes in front of the lodge and they are often the first and last animals we see as we head out and return from the game drives. As the grass has lost most of its nutritional value, they are switching their diet to the woody vegetation and are feeding more off the trees, which always take a hammering at this time of the year.

The male cheetah that arrived in our area a few months ago seems to have settled and is returning regularly. As is typical with cheetah, he prefers the big open grasslands in the south and explores deeper into our concession on each visit.

Boulders and her two youngsters, however, are very regularly viewed and bring an extreme amount of joy. The cubs are now a year old, and spend a lot of time playing with each other while waiting for mom. They, too, cannot resist putting into practice their stalking techniques on each other and any other creature that might wander past!

When they are not up to mischief with one another, they pose beautifully and take a lot of interest in the vehicles, which allows for some fantastic viewing of them.

Mom provides well for them, and we regularly find them with kills hoisted into trees. She relaxes while the cubs feed, but keeps a good lookout for any possible trouble.

Ravenscourt has been very busy this month, walking his normal lengthy territorial patrols and cementing his dominance in the west. So much so, that Tlangisa hooked up with him near the river, and followed him south as far as Mackenzie Camp while mating, which is 10 km (or 6 miles) south of the core of her territory. Although it is not unusual to find females moving far to find a suitable mate (see the last blog where Hukumuri did the same), it is a clear sign that she is seeing him as a possible threat to Homelight, who is the dominant male in the north. Ravenscourt was also seen mating with Ntoma, who is a very skittish female in the south, so it was pleasing to get some good views of her as well.

Basile’s den site was opened for viewing this month. We keep a den closed until the cubs are about six weeks old, in order to keep the pressure off the mother and the newborn cubs, but after six weeks they start moving about and viewing is possible. She has chosen a rocky outcrop which is perfect for a den, as it allows plenty of hiding spots for the cubs to scurry into when danger is near. It makes viewing difficult when they are in the cracks, but when they come out to play on the larger rocks, the sightings are unbelievable!

The flock of ostrich that visits us occasionally made a return this month. Having not had ostriches in this area for so long, it is fantastic to have this relaxed flock enjoying the large clearings near the camp. Hopefully, they will breed successfully again soon, to get a significant population going.

Water is a great environment for birds, and the avian enthusiasts always have a great time when we are along the Sand River or near major waterholes. The Saddle-billed stork, Grey heron and regal Goliath heron are some of the favourites and always give great reflections!

Raptors are also high up on everyone’s list to see. There is something impressive about the hunting members of all types of creatures. The majestic Martial eagle is our largest raptor with a wingspan up to 2.5 metres and weighing nearly 5 kg! The strange-looking Secretary bird always brings shrills of delight when spotted strutting around the clearings, while the Brown snake eagle is a favourite, especially with those who have some snake phobias!

It is unusual to see reptiles at this time of year, as the cold temperatures keep these cold-blooded animals in a type of dormancy, called brumation. This is an extreme slowing of the metabolism, where they are awake but very lethargic. On particularly warm days, they may become active again for a short while, so it was very lucky for some of our guests to see this Flap-necked chameleon crossing the road in the middle of winter!

As the days slowly start getting longer, the cold evenings and early mornings will continue for another few months, and we look forward to bringing you all the updates from then.