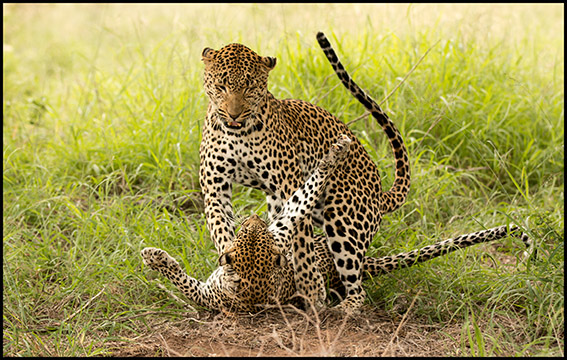 As the year continues to move swiftly forward, we cannot believe that February and March have come and gone in the blink of an eye, leaving us dreaming of summer while winter steadily approaches. The late rains have completely transformed the land to a green oasis, and the animals’ reactions are evident.  The clearings are filled with herds of zebra, impala and wildebeest all enjoying the nutritious long grass. While the dams are slowly starting to fill up, the river continues to flow steadily through the concession. With the Woodland kingfishers still calling throughout the day, we still have hope of future rains to come.

The month of love was certainly true for the Ravenscourt male, as he was seen mating with both Kelly Dam and Basile females.

Ravenscourt continues to gain more territory as he moves north of the river, becoming more dominant at his young age. He covers huge distances while on patrol, and often the excitement of finding fresh tracks close to camp is replaced by frustration when he is found way north along the river, already relaxing in the shade of a large Jackalberry.

Nyelethi and Dewane have both been very quiet this month, lying low and seeming to stay out of Ravenscourt’s expanding path.

By keeping his territory safe from intruders, Ravenscourt is helping the females (and cubs) within his territory to carry on succeeding. Boulders’ cubs continue to grow in confidence every day. Their relaxed nature around vehicles affords us great viewing, especially when practising their stalking skills on each other. As they start to become independent from their mother, they need to start learning the essentials for survival – stalking each other through the luscious green grass is an ideal setting for the learning curve they need.

Keeping with our love of leopards and their cubs, Khokovela has graced us with her presence a few times over the past two months. As expected, the little nervous male cub has relaxed significantly with more exposure to the vehicles and we have had regular viewing of the two of them. She has kept the core of her territory along the Sand River, but has started expanding it as her cub grows in confidence.

Tlangisa continues to thrive in the north, often found hunting or on the move to secure her large territory. Her cub is also doing exceptionally well, and as she approaches her first birthday, we are excited at the prospect of her future. She is growing up to be clever, cautious and gracious just like her mother.

Kelly Dam female was found outside her territory and very relaxed, which is contrary to her normal skittish behaviour. Although many leopards in the area are habituated to vehicles and are incredibly relaxed with the movement around them, Kelly Dam seems to be rather unsure of vehicles and thus viewing of her is usually when she is up a tree with a kill. We were fortunate to have some great views of her as she jumped onto a large fallen-over marula tree to investigate her surroundings and take a quick stretch!

Thamba made a brief appearance back to the west, still impressing us with his size and confidence. However, the presence of Ravenscourt and Nyelethi will still be a big factor in this young male finding his own territory. As mentioned before, Ravenscourt does have a large territory, but is still able to patrol and scent-mark the area frequently. At just under three years old, Thamba still has a long way to go before being able to challenge the dominant males and will probably be reluctant to stay in the area too long.

The Sand River continues to be the centre of activity and attracts a collection of wildlife to the clean, flowing water. Many of the migratory birds still enjoy the plentiful food around, and it seems that there is something for everyone along this productive riverine habitat.

With scattered rain creating mud wallows around the concession, the elephants have enjoyed the cool mud on a hot summer’s day. This action of spraying mud and dust over their gigantic bodies is to cool themselves down and to protect themselves from biting insects.

The herbivores have started their battle for territories, fighting for the prime spots along the river, and by the full watering holes. These territories will be fiercely fought for and defended over the next few months, as the breeding season approaches us. The Nyala males have been some of the first antelopes to start fighting over the superior river territory. In an elegant dance, the males will move around each other, sizing each other up and raising the white hairs along their back to increase their apparent size and make themselves look like the ‘bigger’ male.

With the days starting to get shorter, the guttural sounds of the impala rams’ rutting is often heard as the territorial males begin to fight for territory and dominance over female herds. With fierce competition and limited space, the males are starting early in order to secure the best stretch of land.

The wild dog have made sporadic visits onto the concession, showing a lot of interest around the river, due to the large concentration of antelope in the area. Hyenas are often seen following the pack, waiting for the opportunity to steal their hard-earned meal. Interaction between these two animals is not uncommon and is always interesting to watch.

The Mhangene females, along with the Ottawa male, made a quick visit into our concession at the beginning of February. It has been interesting to see how well the Ottawa male has fitted into the pride. He seems to be incredibly respectful of the females, giving them their space, but at the same time being the only dominant male of the pride.

The Ottawa pride continues to grow stronger and more confident in its territory. The older male cub is at the age of boisterousness, starting to follow the females on their hunts (mostly being a disruptive presence), and constantly looking for a play partner. Most of the time, this turns out to be his younger siblings who often have little say in this.

Bullying and being bullied is, however, part of the learning cycle, and sometimes the male cub takes on someone bigger than him when the adults are in the mood for play.

The exciting moment of the month is without a doubt the presence of a new lion pride in the area. The Styx Pride, which normally resides in the far North and Eastern sections of the Sabi Sands, was found for the first time on a zebra kill in the northern clearings of the concession. The pride consists of ten members – two adult females and eight sub-adult cubs. In an exciting turn of events, they lost their kill to one of the Matimba males, who rushed in to zero resistance from the Styx pride. They quickly left the area of the kill, but stayed in the concession for over a week.

As the green grass continues to grow higher and higher, there is a density of general game back in the clearings. Regular sightings of zebra, wildebeest and elephant keep our guests entertained between drives, as they relax by their plunge pools and enjoy the sights and sounds of nature.

Africa is renowned for its sunsets, and we leave you this month with a collection of spectacular silhouettes.